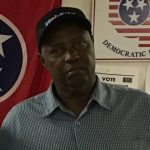 Wilbert Henry Jefferson was born on October 13, 1956 to the late Thomas and Madgerine Jefferson in Somerville, Tennessee. He grew up working on the Jefferson Farm, as well as the Jefferson Construction Company, where he learns the trade of building, farming, and hard work. In 1974, he graduated from Fayette Ware High School.

October 11, 1980, he married the love of his life, Virginia Jefferson, who preceded him in death. They had two children, Virmeka Jefferson and Wilbert Jefferson II. Wilbert was a devoted husband and father who always relied on his faith through all times.

Wilbert was an outspoken and opinionated man who was appreciated by many. If you were coached as a kid in football or mentored as an adult; he was always a listening hear. He loved gatherings, talking over a hot meal, and watching western tv shows. He was truly a people’s person. Wilbert was a man of many talents. He worked as a Building Contractor and a farmer in animal husbandry. After retirement, he loved being a grandpa which is where he devoted the rest of his years.