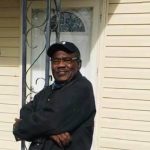 He accepted Christ at an early age. On April 4, 2021 he departed this life at Jackson General Hospital in Jackson, TN.