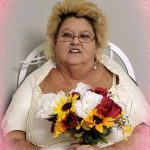 Mrs. Jenkins was born December 23, 1964 in McKenzie, TN to the late Bobby and Beulah Mingle of Gleason, TN. She is preceded in death by one brother Michael Mingle. She is survived by her husband Jeff Jenkins, 4 daughters April (Carl) Hart, Amanda Hart both of whom were fathered by Andrew Hart, Stephanie Lyell, and Crystal Wilson. She is also survived by 2 sisters Tammy Mingle and Kim Connell, 2 brothers Steve and Larry Mingle, 6 Grandkids: Austin, Daniel, Carli, Zayden, Maddie, and Scarlett, 7 nephews and 5 nieces.