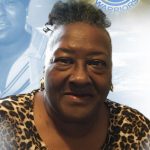 Myrtle attended Bolivar Industrial High school and graduated with a high school diploma. She was employed during her stay in Chicago, IL at the U. S Post Office for 28 years. After moving back to Tennessee, she enjoyed spending time with her family and friends.

Myrtle professed her belief in Christ at an early age and joined Hopewell Missionary Baptist Church. She remained a member of Hopewell until her death.

Myrtle was loved dearly by her family and friends. She enjoyed helping others and giving to those in need. She also enjoyed calling and singing “Happy Birthday” to family and friends on their special day. Myrtle was a big sports fan. She especially loved NBA basketball and her favorite team was the Golden State Warriors. Myrtle also enjoyed attending college basketball games to watch her grandson Ty play at Union University.