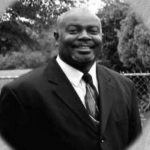 Kenneth Lee Smith was born on November 11, 1962, in Milan, Tennessee. On Thursday, November 28, 2019, God sent his death angel to guide “Kenny” home to be with our Lord and Savior, Jesus Christ.

Kenny was born in Milan, the baby, to the late Ernestine Smith and attended Milan High School graduating in 1981. He was offered a four year football scholarship from UT Martin, but elected to enroll at Tennessee State University (TSU) and attended TSU from 1981- 1983, majoring in Communications before enlisting into the U.S. Air Force.

Kenny was united in marriage to Pamela Walker. From this union two children were born: two daughters, Courtney and Cydney Smith.

As a resident of Tennessee for most of his life, he was an accomplished athlete that excelled in all sports—baseball, basketball and football. Kenny was preceded in death by his mother, Ernestine Smith; and brother, Leroy Porter.

We are thankful for the precious memories of “Kenny” and will truly, truly miss him!