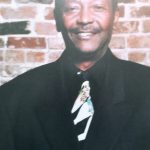 Keith Bernard Saine was born on October 17, 1953, in Whiteville, Tennessee to Beulah Bea (Saine) Colston and Charlie Burl Woods, which both proceeded him in death. He confessed his hope in Christ at an early age. Keith lived a simple yet happy childhood with laughter and love, he spent the majority of his youth with his Auntie Lou Bertha Saine and grandmother Fannie L Woods. He relocated to live with his mother and stepfather Robert Colston (who proceed him in death) in Detroit MI where he attended Junior High School. In 1971 he joined the United States Peace Corps which lead to him becoming a member of the armed forces of the United States Navy on August 1, 1972, and received an honorable discharge July 23, 1975. After his discharge, he relocated to Jackson TN to live with his grandparents Albert and Ada Saine, who assisted with his walk with Jesus Christ. Keith met the love of his life, Michelle Ross, in 1980, in Jackson, TN. Their union produced three beautiful children Domonic, Calvin, and Latasha. Keith had a beautiful smile that would light up a room, a warm heart, and was a Jack of all trades. He especially found pleasure with cooking and spending lots of time with his grandchildren and godchildren. Keith worshiped as a member of several churches before joining Mount Calvery Baptist Church in Boliver Tennessee, Pastor Algie Jarrett. He leaves to cherish his precious memories in the hearts of his 2 daughters, Domonic Ross, Latasha Ross-Chism, and son Calvin Ross of Jackson, TN; three brothers – Dana Colston (Cynthia), Darryl Colston (Tracey) and Robert Colston (Audrea); 4 brothers who proceeded him in death Charles Saine, Gregory Woods, Cedric Woods, and Calvin Woods; three sisters Cheryl Colston, Charlotte Woods, Pamela Shaw (Earl); five grandchildren Destianna, Jermie, Kalina, Caleb, Layla; and a host of nieces, nephews, uncles, aunties, cousins, godchildren and friends.