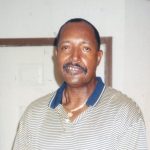 On July 31, 2020 Minister John Thomas McKinnie transitioned peacefully to his heavenly home after a lengthy illness at his home.

Minister John Thomas (T) McKinnie was born September 29, 1946 to the late Mrs. Lucille Smith. He was one of twelve children, ten preceded him in death.

Minister McKinnie was educated in the Hardeman County School system. He was employed by several companies where he worked faithfully until his health failed.

Minister John McKinnie had a passion for the word of God. He would read and study God’s word daily, so he would know how to please God. He strictly believed that holiness is the only way of life and it was imperative to be holy.

He was a faithful member of Toone Pentecostal Church of God In Christ where he served as Church minister.