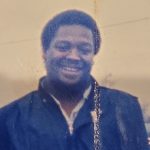 Jeffery Lynn Butler began his earthly journey on April 22, 1964 in Carroll Co. He was born to Jethro Butler and Jettie B. (Rivers) Butler. He departed this earthly life for his eternal home with the Lord on June 10, 2020.

Jeffery was loved by his friends and family with all their hearts. He was a very kind soul. He accepted Christ at a young age, and joined the Hopewell Missionary Baptist Church in Yuma, TN until his death.

Jeffery lived in Henderson Co. all his life and worked in the Milan Arsenal Plant. Also he worked in Lexington, TN at the Magnetek plant. During his illness he had much support from family and friends.

Preceding him in death was his father and mother, Mr. Jethro Butler and Mrs. Jettie B. Butler, a Brother: Gene Hart, and a Sister: Normal Williamson.

He leaves to cherish his life and memories a Brother: Terry Lynn (Alice) Butler of Lexington, TN, one Aunt: Norma
Mebane of Huntingdon, TN, a host of Nephews and Nieces, Family and Friends, and one special frined: Eddie Berkley.