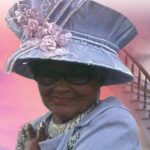 She confessed to Christ at an early age and joined Hardaway M. B. Church. It was her later years that she moved her membership and joined New Victory M. B. Church, where she was also a faithful and dedicated member.

On May 15, 1949, Idince married the love of her life Mr. Dock Davis, Sr. To this union eleven children were born.

Upon the calling of the Lord, Idince departed her earthly home and entered in eternal rest on December 16, 2020 at Bolivar General Hospital Bolivar, TN.

Madea as she was affectionately known by so many was a homemaker and enjoyed spending time with her family. She especially loved shopping and cooking no one could get enough of her greens! Although she was sweet and gentle she was yet courageous. In her early years. She was known as the first Black Female to march in Ashland, MS during the Civil Rights Movement.