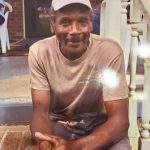 “Two Charlie” as he was often called; loved being around people, always with a smile even on his worse days. He
could travel city to city without a car, comeback with a laugh and a joke.

He accepted Christ at an early age.

In addition to his parents Mr. Irons was preceded in death by a granddaughter Ariel Nicole.

He is survived by a daughter Andrayia Davis of Clinton, MS. Three brothers Bill Irons (Florida), and Ronnie
Woodard both of Bolivar, TN and Michael Taylor (Lynette) of Lexington, TN. He also leaves a host of nieces,
nephews, family and friends.