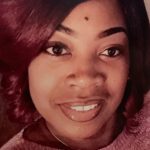 She departed her life Thursday December 5, 2019 at Jackson General Hospital. She was preceded in death by her mother Thelma Jean Robertson.

Angela accepted Christ at an early age and joined Clover Garden C.M.E. Church. She later joined Simon Chapel M. B. Church under the leadership of Pastor Jeffery Bledsoe. She was a graduate of Bolivar Central High School. She was a loving and kind person. She greeted people with open arms. Her favorite past time was spending time with family, kids and her granddaughter. Angela had a charming personality and was a beautiful person inside and out. Angela’s main hobby was taking pictures, she had a total of 13,897 pictures in her phone.