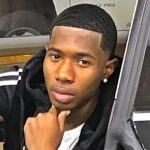 This Memphis native graduated from Bolton High School in 2017, where he was a star athlete in basketball and football. He wasn’t your average kid, he was SPECIAL! Albert also known as “Boo Boo” & CEO Bezzal would go out of his way to make sure everyone around him was happy. He loved spending time with his family, shopping, and traveling. Boo Boo also liked to play football and basketball. He was an outstanding guy who will be missed by his loved ones.

Albert leaves to mourn his memories his mother Lanita Jefferson; father Albert Smith Sr; one son Albert Smith III (A3); four sisters: Johnisha Thomas Aterika Smith both of Grand Junction, TN, Kia Smith of Nashville, TN, and Shell Fisher of Virginia; three brothers: Alwonte Smith of Ashland, MS Kevin Smith and Dealbtonio Smith (Leann) both of Grand Junction, TN. He leaves to mourn a special person with whom he shares a baby boy with Jamecia Atkins. He also leaves a host of aunts, uncles, nieces, nephews, relatives and friends who will miss him dearly!